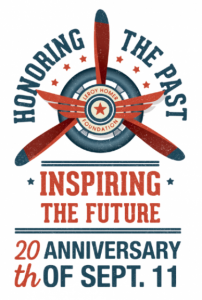 Join us at FAME Philly on August 28th for our 20th Anniversary of September 11, 2001 event fundraiser. We continue to grow the legacy of Major LeRoy W. Homer Jr. as we gather to share our memories, our…

Join us for an evening of remembrance following the 20th Anniversary of September 11, 2001 with keynote speaker Heather "Lucky" Penney and a silent auction. The Heroes of Flight 93 Gala is an annual charity fundraising event held by the Captain Jason Dahl Scholarship Fund, which honors the memory of those lost in the September 11th attacks by sponsoring future aviators with scholarships.